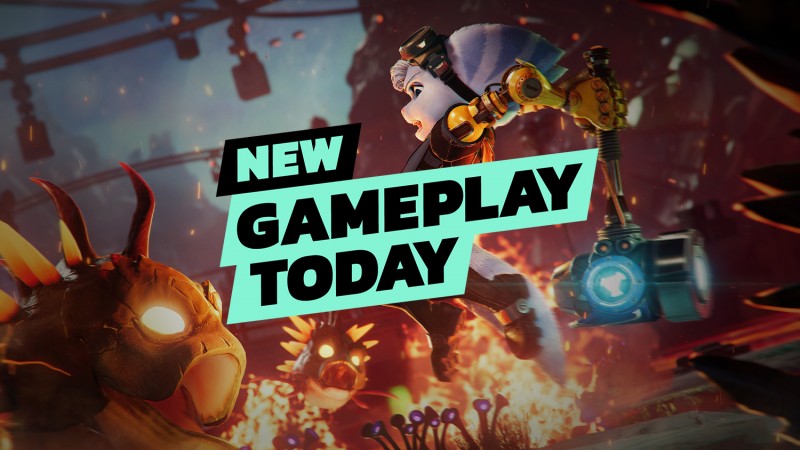 When people think back to the heyday of the mascot platformer, Ratchet and Clank stand on equal footing with the bandicoots and purple dragons of the world. Just as the former had its day in the sun last year with Crash Bandicoot 4: It’s About Time, developer Insomniac Games is bringing back these icons in a big way. Ratchet & Clank: Rift Apart is less than a month away but we’re giving you a brief look at the game on this episode of New Gameplay Today!

In this special 4K video, we’re not only giving you a look at actual gameplay from Ratchet’s point of view but from the perspective of his new female counterpart as well. Rivet, a mysterious new lombax, is fierce with her own abilities to wield the wild weapons Insomniac and the series are known for. It’s up to her to help rescue Clank and figure out Dr. Nefarious’s evil schemes while also reuniting him with his furry friend. On top of all that, we also give you a look at the game’s goofy yet deadly enemies and the updated traversal system that will have players flying around each new planet.

Join Blake Hester, Ben Reeves, and me as we show you an early look at the latest game from Insomniac and discuss the updated weapons, gorgeous scenery, and inspirations for Ratchet and Clank’s newest adventure.

The fun doesn’t stop here though. If you can’t wait for Ratchet & Clank: Rift Apart’s exclusive PlayStation 5 launch on June 11, Game Informer has you covered. Be sure to check out this look at the beginning of the game with Marcus Smith, creative director at Insomniac, our interview with game director Mike Daly on the origins of the game and Rivet, and Andrew Reiner’s extensive preview of the fast-approaching new entry in the iconic series.