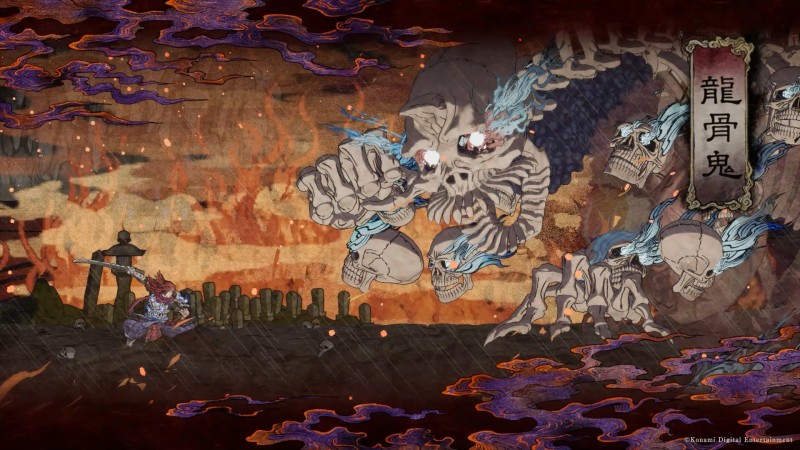 GetsuFumaDen: Undying Moon arrives in Early Access today on Steam, and is coming to Switch in 2022. This “roguevania” lets players dive into Japanese ukiyo-e style environments as they slash their way through dangerous, beautiful levels and titanic bosses. GetsuFumaDen: Undying Moon is being developed by Konami and GuruGuru. Players can explore various levels that look like living tapestries, from the fires of hell to majestic waves.

While players crash into the levels to take on bosses, find weapons, and explore again and again, there are persistent elements in play as well. At your home base, the Getsu Clan Estate, you can add a wide variety of permanent bonuses and boosts to your character as well as strengthen your weapons and equipment. In this fashion, the game leans toward the “roguelite”, where if you persist over time from run to run, you will eventually gain significant power that gives you a serious edge in combat, giving you a considerable advantage in lower levels and difficulties.

You’re going to pick up standard weapons like katanas, clubs, battle umbrellas, and fist armaments, but also side weapons that can help you get past more challenging foes that require some thought. Items like the bow and arrow, caltrops, or bombs can help you deal with difficult encounters without having to put yourself at risk.

In this episode of New Gameplay Today, join the Game Informer gang as they watch Alex Stadnik pilot his way through the first stage. There are plenty of different levels to work through even in this early access period, showcasing diverse and sometimes captivating environments. While GestuFumaDen: Undying Moon is currently only available on PC, I highly recommend using a controller to play instead of mouse and keyboard.

Interestingly enough, this is technically not the first GetsuFumaDen game, with the original landing on the Super Famicom all the way back in 1987. The games are obviously quite different, but both feature side-scrolling action.

What do you think of GetsuFumaDen: Undying Moon? Are you going to check out Early Access? Wait for release? Make a comment about Konami making something other than pachinko machines? Let us know!