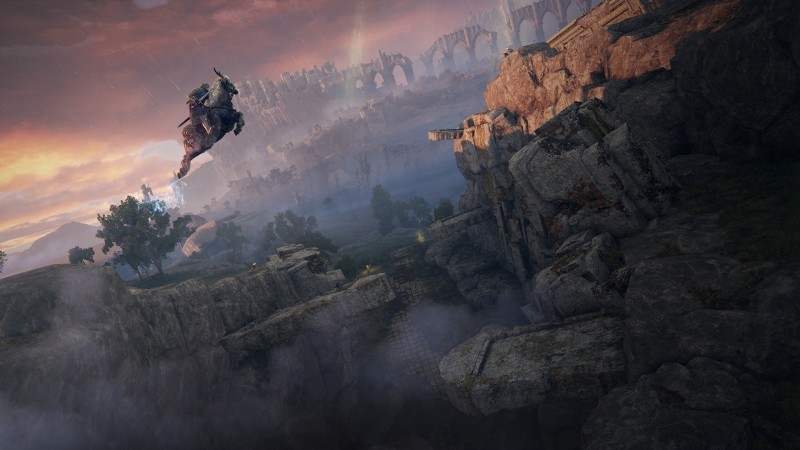 The unthinkable happened on June 10, 2021. We finally got an Elden Ring trailer! During Summer Game Fest, we not only got an extensive new look at the upcoming FromSoftware game, but we also got a release date as well! January 21, 2022, is the date to remember, but that doesn’t mean the revelations are quite done. In addition to the amazing gameplay video revealed earlier this week, new details have emerged to reveal that Elden Ring will offer co-op.

If you look at the official Bandai Namco website for the game, seen here, the publisher confirmed the ability to play with friends under the “world exploration in the lands between” section. On the game’s listing, it says, “Traverse the breathtaking world on foot or on horseback, alone or online with other players, and fully immerse yourself in the grassy plains, suffocating swamps, spiraling mountains, foreboding castles, and other sites of grandeur on a scale never seen before in a FromSoftware title.”

For those new to FromSoftware, this isn’t the first time this studio has incorporated online co-op. Dark Souls did it in a unique way, so it’s not surprising that Elden Ring would also adopt this mode of play. FromSoftware hasn’t revealed quite yet how the online co-op play will work, however, but we have reached out for comment to see if we can learn a little bit more.

As for the game itself, the internet exploded when Elden Ring closed out the showcase yesterday with Summer Game Fest. The show itself had a healthy balance of game reveals and first looks, if not a hefty dose of Amazon sponsorships, but to end it on that note? I’m pretty sure Geoff Keighley is a genius.

To learn more about Elden Ring and all of the other amazing reveals so far, be sure to mosey on over to our E3 2021 dedicated hub here to see what else E3 and Summer Game Fest has in store. We’ll be updating that constantly in the weeks ahead, so make sure to bookmark if you’re interested in staying in the know!