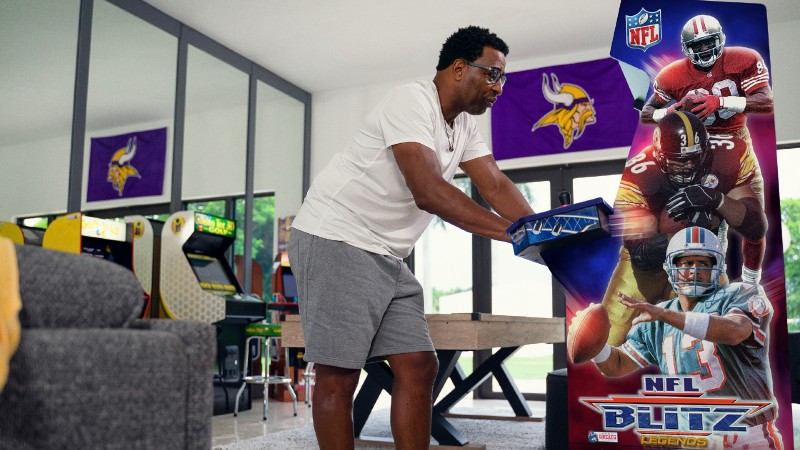 Arcade1Up, the team behind the upcoming Marvel Vs. Capcom 2 arcade cabinet we recently played at EVO 2022, has announced NFL Blitz Legends, a new at-home cabinet that features remasters of three games from the popular franchise.

“We could not be more excited to bring NFL Blitz Legends to fans who have been waiting years for the return of this iconic game,” Arcade1Up CEO writes in a press release. “Our team spent the better part of the last two years making sure we both honored the games’ past while bringing it up to today’s modern standards with AAA development efforts in partnership with the NFL and FGA, and I think we’ve achieved that in an unbelievable feat of fun, exciting, action-packed gameplay while reengineering the original game.”

In remastering these three Blitz games, Arcade1Up had to tweak some of the tackles and after-the-whistle hits in the games “to support the NFL’s current Player Health & Safety initiatives,” including edits to these moves or outright removal of some. This at-home cabinet will include local multiplayer, of course, but it will also give players the ability to compete online with Wi-Fi multiplayer and leaderboards.

“Build to resemble the iconic NFL Blitz found at retro arcades, NFL Blitz Legends is a five-foot-tall arcade machine featuring NFL legends on the sides of the cabinet,” the press release reads. “The artwork and gameplay also feature retro team logos and uniforms, adding to the authenticity of the gaming experience. In addition to Wi-Fi multiplayer and leaderboard, the arcade machine has a 49-way joystick and 17-inch screen with a light-up marquee, and a branded riser.”

You can pre-order the machine starting today for $599.99 and branded stools representing every team in the NFL today are available for $79.99. The first 1000 consumers to pre-order the machine from Arcade1Up.com will receive a limited-edition NFL Blitz Legends hat as a gift with the purchase.

Are you interested in adding NFL Blitz Legends to your home arcade? Let us know in the comments below!